Thanks for playing! Linger is #1 on itch.io, also updated to the latest version. 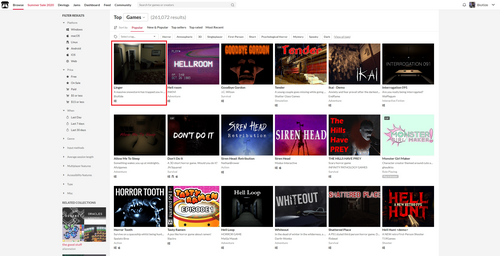 Thanks for playing the game, I built this in a few days, mainly over a weekend for a gamejam. Sadly, the game didn't win anything, only got an honorable mention, but at least its the #1 game on itch.io for over a week now, which is pretty cool! I created this game just to take a break from my main project, which is a sci-fi MMO https://www.mankindreborn.com/ , and never really expected anything out of it.

Since the jam is over, I have updated the game with the latest version, which includes some bug fixes and the TV screens working, I'd love to wrap up this game entirely and ship it as a full game, it is in the realm of possibility, but just not at the moment.  Still, if you guys would like to see this game be released, feel free to comment below, if I see a lot demand for a full version, it's likely that I'll make some adjustments in my daily schedule to fit a development cycle for Linger.

One last thing, this game was inspired by Project Frequency, which is one of my earliest video games developed, it takes place within the same universe, it's a bit clunky, bugged and unfinished, but has some nice scares, I just recently uploaded it to itch.io if you would like to try it out https://bioxide.itch.io/project-frequency

A massive snowstorm has trapped you in an apartment during a vacation, weird things begin to happen.

RELEASE THE GAME. NOW! lol I'm just very hyped up by this game, the atmosphere is fantatic, so just ship the full game man, its a bomb.